While many would have considered Manchester United v Liverpool or Aston Villa v Wolverhampton Wanderers as their match of the day with chasing teams gaining the upper hand, a worthy alternative was Hereford FC v Kings Lynn.

Hereford FC are rising from the December 2014 demise of Hereford United. The newly formed club, keeping the Bull mascot, the club colours and the Edgar Street ground have started to bounce back and hope to eventually regain Football League status.

What is impressive is the fan base they have kept and grown. With over 1500 season tickets they have deserved their success having won the Midland Football League in 2015/16, the Southern League South and West League in 2016/17 and now sit top of the Southern League Premier Division. In between all of this was a trip to Wembley for an FA Vase Final.

Hereford started the game 10 points clear at the top of the league against their nearest rivals Kings Lynn who had played one game more. A win would have left them out of sight in the league with only Slough with games in hand any threat to their ultimate promotion.

Hereford however never got into their stride and although hitting the bar once in each half never looked like taking control. The very wet pitch made keeping control of the ball difficult and gusting winds made for some high balls straying from their intended destination.

At half time the 0-0 scoreline looked the most likely final outcome to the game but some head tennis in the Hereford goal mouth lead to Ryan Fryatt beating Hereford’s goalkeeper Martin Horsell on 58 minutes. With the home side trying to push forward Toby Hillard received a through ball which he ran onto to slot home for 2-0. Hereford never looked like coming back from this and the game petered out for Kings Lynn to inflict the double over the league leaders.

Hereford need to regroup to continue their rise up the leagues and the 3424 who attended was a bigger crowd than at 8 Football League games some three and four leagues above this level. I’m sure that Hereford will get their reward this season. Everyone at the ground was so friendly when buying a ticket a few hours earlier and two Kings Lynn fans decided to chat to me all of the match. This was Non League football at its best although I believe the conditions did not give me the end to end football I had hoped for. Great day out. 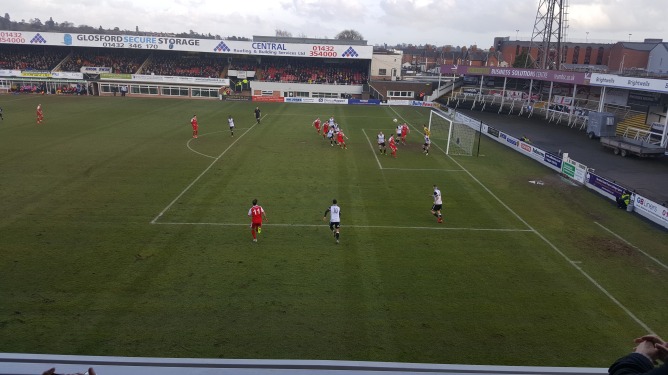