On the first day of September (the weather forecasters start of Autumn) I visited Worksop Town’s Sandy lane ground to see them entertain Grimsby Borough in the 1st qualifying round of the FA Vase. The sun was out and the temperature reached 26 as these two North East Counties East Football League clubs competitively entertained a good crowd of 374 supporters.

Although Worksop play in a league above Grimsby they were evenly matched and it was understandable why Grimsby are fancied for promotion this year.

Worksop claim to be the fourth oldest team in England starting in 1861 but research has shown no records of them until 1873, ref: ‘A History of Sheffield Football 1857-1889 – Martin Westby’. This however still makes them one of the first clubs in England with a proud tradition. They have played at a higher level and done well in the FA Cup in the past but financial problems have brought them to where they are today, They  have returned to Sandy Lane, sharing it  with league rivals Handsworth Parramore whose owner purchased the Sandy Lane lease in 2011 and agreed a deal to allow Worksop to return after a nomadic period of ground sharing. Things are looking up again for Worksop Town.

Grimsby Borough by contrast joined the Supreme Division of the Central Midlands League in 1987 then under the name Grimsby Ross. They finished bottom of the division in 1988–89, and were renamed Grimsby Borough at the end of the season. After disapointing results in the early 1990’s the club was re-established in 2003, in the Lincolnshire League. Since then they have been working their way through the pyramid system.

They play at Bradley Football Development Centre, Grimsby Rd, Laceby, Grimsby DN33 1RS which is significant in that they are the premier team in Grimsby. As many pub quiz goers will know , Grisby Town’s ground,  who play in the EFL League Two is in Cleethorpes, leading to the quiz question’ which EFL team plays all of their games away’. 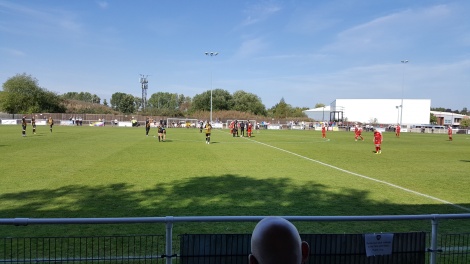 The pitch was in great condition with a slight slope from end to end and it only took Worksop 3 minutes to take the lead when Mathew Sykes controlled the ball in the penalty area and drilled it past the outstretched right hand of Scott Drury.  Worksop Town continued to dominate throughout the first half and went in at half time 1 nil up. Grimsby Borough’s defensive composure had been dented when  their number 17 had to have attention to a very bloody nose after what looked like a clash of heads.

Worksop continued the pressure after the break and made it 2-0  when Steven Wooley scored on 55 minutes. They always say that 2 nil is the hardest lead to defend and that proved right as Grimsby came right back into it on 65 minutes when a through ball found Adam Drury and he calmly slotted home. Only some stout defending with bodies being  peppered with shots enabled Worksop to hang on for the win. On this showing both of these two teams can look forward to a good season.

The chips are strong contenders in the league with a score of 70. They were hot, golden in colour, served quickly’ tasty and cost £1.80. The container and fork were plastic but I did not mark them down like Forest Green as they do not espouse their green credentials.