Having had the warmest February on record it was back to normality at Maltby Main with storm Freya threatening and the winds beginning to gather strength and the temperature dropping to usual levels. Maltby were all prepared to take on Penistone Church FC the current leaders of the Northern Counties East League – Premier Division, although Penistone had faltered at home in midweek and the chasing pack were gaining.

Today, March 2nd, is the anniversary of the late great William McGregor’s letter to other senior English teams proposing a League structure. That letter in 1888 and its acceptance spawned many competitive leagues and was more than a small part in us all watching such games today.

The match pitted the leagues highest scorers (Penistone) against the meanest defence (Maltby) and early play indicated that this was to be a tight game. However on just five minutes Jordon Turner, Maltby’s number 11, elbowed an opponent in the face and received a straight red and also appeared to attempt a kick on another Penistone player as he walked off. The resulting scuffle was no more than attempts to get him off the field quickly and the game resumed. Maltby playing uphill on a very even dry pitch matched Penistone with the disadvantage of being one man down. Both goalkeepers were called to make good saves to turn shots over their bars and it stayed at nil nil at Half Time. 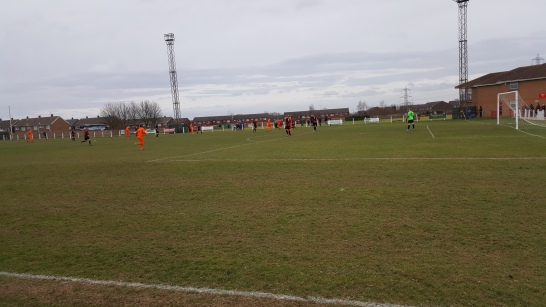 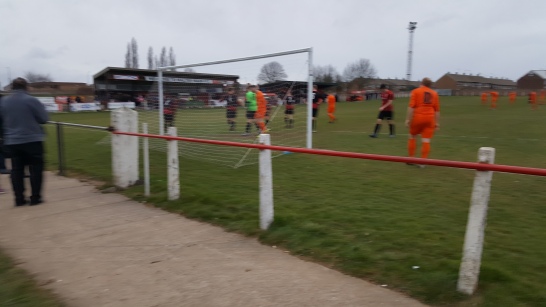 Penistone put on the pressure from the start of the new half and a free kick into the box was headed goal wards for their number 5, Thomas Cadzow, to head home. With the score 1-0 on 50 minutes the floodgate should have opened but Maltby showed their composure and started to get on top. A series of Maltby substitutions added fresh legs and they were denied by Chris Snaith in the Penistone goal. Penistone seemed to lose momentum up front and started to play out the game holding onto their advantage. They ended the game more willing to run out time by the opposing sides corner flag than attempt to play an attacking move that may have given possession away.

The One nil score to Penistone kept them top of the league but the fact that they did not take further advantage of their extra man suggests that their tenure at the top may not be long. Maltby again showed their defensive qualities and could be partially happy with the result.

No chips here and a poor refreshment offering. I settled for a coffee at £1.

Conversations are easy to have at Non-League games and today was no exception. A Penistone fan took me under his wing and explained about their rise from the Sheffield & Hallamshire Senior League to where they are now. This has been due to a visionary committee and a Management team of brothers Ian and Duncan Richards both in education like the Cowley brothers currently leading Lincoln City’s assault on gaining promotion from league Two. Whatever happens to the team this year you would expect them to move on to a higher level. However their local commitment to the team and their jobs might just keep them pushing the Penistone dream.