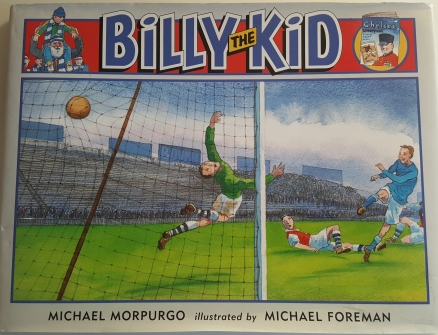 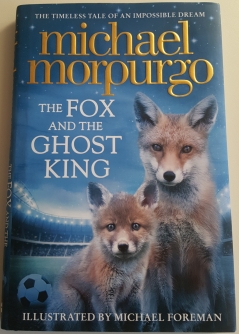 I recently was lucky to find a copy of ‘Billy The Kid’  by Michael Morpurgo on a bookstall in Derby Market that was signed by Michael Foreman the illustrator. This added to my recent reading of ‘The Fox and the Ghost King’ also by the same author and illustrator.

‘Billy the Kid’ first published by Pavilion Books Ltd 2000 is set in West London and is about a boy whose love for football and Chelsea takes him all the way to achieve his goal and play for them. Tragically the war interrupts his career and devastates his family and his heroics mean that an injury means he cannot attain the levels on the field he once achieved. His fall into despair and loneliness is finally countered by his love for Chelsea and he returns to the area where he was born. Luck turns his way and he is able to join the Chelsea Pensioners and again receive the adulation of the team and fans of his favourite club. A really good human story that gives you a warm feeling inside.

The 2016 book ‘The Fox and the Ghost King’ published by Harper Collins Children’s Books tells of how a family of Foxes living in Leicester hear strange voices coming from the ground of a central car park. Their digging exploits lead people to uncover Richard the Third’s grave and release his ghost who grants  the Foxes a wish. as all foxes in Leicester are Leicester City supporters they ask if they can win the premiership. He keeps his word and the rest is history. A really good feeling book even for every fan from other clubs.

Having read both of the books I still do not know which football club Michael Morpurgo supports but I do know he supports football in general and the human spirit.