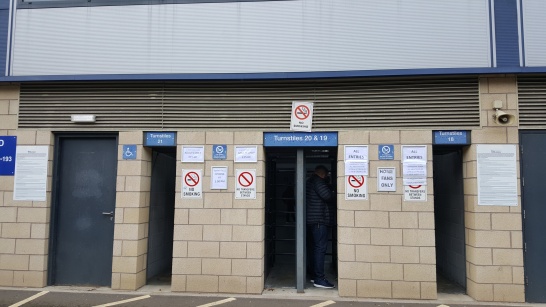 I had the opportunity to visit the Shay in Halifax to see the F.A. Cup 4th Qualifying Round, Halifax Town v Harrogate Town. I had not visited the Shay for ages and it has changed out of all recognition partly due to the sharing arrangement with the local Rugby League Club

It is now a very modern ground, not a concrete jungle, with great facilities that now graces the National League.

The day was very Autumnal with grey skies, little wind, but a chill in the air. The pitch looked perfect but had cut up badley where the practice goals had been placed. 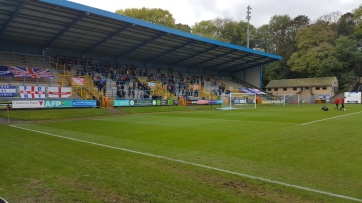 Halifax Town AFC have had their ups and downs. Formed in 1911 they worked their way up to the Football League in 1921 where they stayed until relegation to the Conference in 1993. A promotion in 1998 saw them back in the League but for only 4 years and life back in the Conference was hard and financial difficulties lead to administration in 2007. A further demotion due to financial difficulties found the newly reformed club in The Northern Premier League One North in the 2008/09 season. They have since fought their way back and now sit top of the National League but recent results have been disappointing.

Harrogate Town were formed in 1914 and played in local football until the 1980’s when they were founder members of the Northern Counties East League. Progress has been steady and in 2016 layed a state of the art 3G pitch and started operating as a full time professional club in the 2017/18 season. They were rewarded for this move gaining promotion to the National League that season. They are now well established as a major force in this 5th tier of English Football.

Harrogate started the best in front of the disappointing crowd of 1246. Their attacking play down the right was causing problems with Brendan Kiernan putting in some good crosses which were causing angst for the Halifax defence. One of these crosses on nine minutes was headed onto the crossbar by a back peddling Josh Staunton who unfortunately saw Mark Beck score from the rebound.

The diminutive figure of Josh Faulkingham bossed the midfield seeming to be everywhere. Despite this Halifax should have gone in level when on 30 minutes Jerome Binnom-Williams should have done better with his header with an open goal beckoning.

Harrogate ended the half on top but within a few seconds  of the second half Niall Maher tapped in at the back post to level the score. Halifax should have pushed on from this but again Harrogate dominated midfield and they retook the lead on 54 minutes with some neat interpassing on the right for Jack Muldoon to cut the ball back across goal for Beck to get his second.

Halifax tried with little success to regain the momentum and even using all of their substitutes could not create an effective threat. 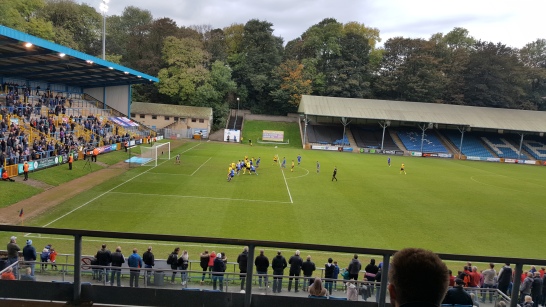 The food facilities were very good but the chips at £2 were only warm and a bit soggy, disappointing, only scoring 56. 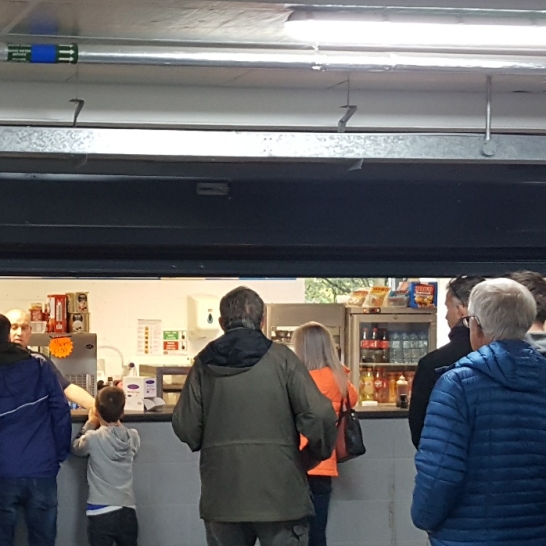