With storm Alex sweeping across the country it was a case of sailing on the motorway until junction 26 and the heavy traffic on the A610 towards Ilkeston turned out to be for IKEA rather than turning left at the roundabout to Ilkeston like me.

The ground is reached over a one way traffic light controlled bridge over the Erewash 0canal leading to a large car park.

The river Erewash runs down the other side of the ground but the playing surface looked to have coped with the downpour. The pitch was flat and like other pitches I have seen this year has great grass cover.

Ilkeston FC’s badge shows the past coal mining tradition in the town but iron and steel production along with textiles were all important in it’s growth but all have almost now disappeared. For the second week in a row the home team are called the Robins.

The ground is very tidy and has good cover with a stand in one corner of the ground. There are two snack bars and a big bar/function building all of which were very busy.

The game was an F.A. Cup Second Qualifying Round between Ilkeston Town F.C. v Hanley Town F.C. Ilkeston play in the Northern Premier League Division One South East, one level above Hanley who play in the North West Countries League Premier Division.

Ilkeston Town F.C. have only been in existance since 2017 taking up the local mantle from Ilkeston F.C. who had only been reformed in 2010. The current team having been elected to the Midland Football League won back to back promotions before last season’s results were expunged and their support and ground could see them progress further over the next few years.

Hanley Town, one of the town’s that make up the Potteries has had a team since 1882 but this club hails from Sunday League football in the 1960’s and played most of their football in the Cheshire Leagues and after being denied entry into the North West Counties League in 1988 dropped back to regain momentum in the the last 10 years and reach Division One and the Premier Division of their current league.

Ilkeston started the game with intent and looked strong for the first 10 minutes with penetrating runs down the right wing. However as Hanley came more into the game they took a shock lead when number 9 for Hanley nodded the ball down to Nial Cope who buried it in the net under the goalkeeper after 20 minutes.. Hanley were now more adventurous but we’re undone 14 minutes later by Zak Goodson who received a ball on the right side of goal, beat an advancing defender and placed the ball home inside the post. Only 3 minutes later Zak Goodson again cut back a ball for Nat Watson to shoot the home team into the lead. Hanley upped their game but Ilkeston went in ahead at the break.

Hanley continued to push forward in the second half and had a shot cleared off the line but this left them exposed at the back and Ikeston came close as well. On 70 minutes Hanley bought on the ex Premiership player Richardo Fuller and within two minutes he had made an impact being brought down in the penalty area after some clever footwork. He stepped up to take the penalty and after a shimmy he struck the ball towards the right corner but Ross Currant in the Ilkeston goal made an amazing dive to his left to save the spot kick. 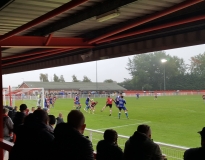 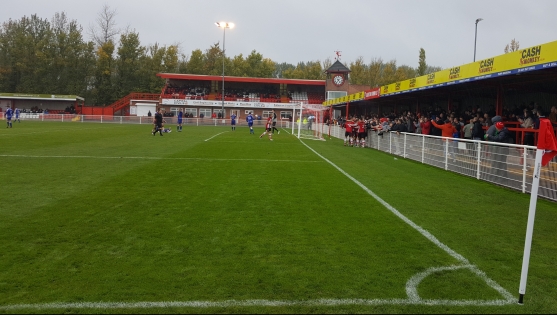 This seemed to sap Hanleys energy and resolve and Ilkeston pushed more and more on goal and were rewarded on 83 minutes when it was Zak Goodson again who controlled a pass and curled his drive into the centre of the Hanley goal to increase their lead. Then with minutes to go Nial Cope of Hanley was sent off for upending an opponent in the penalty area and Alex Troke put it away to make it 4 – 1 for Ilkeston who were into the next round. Hanley looked good despite the score line but their resolve waned after the penalty miss and heavy legs caught up with them.

On such a miserably wet day I was thankful for the £2 portion of chips which were amazing. They were hot, golden, tasty and I had to resist a second portion. A great score of 85 that will take some beating this season.