If you have ever played Sunday league Football you will enjoy the book I have just read ‘We are Sunday League’.

Written by Ewan Flynn and published in 2017 by Pitch Publishing it tells of the rise and fall of Wizards FC as they race to the top of North London Sunday football as members of Edmonton and District Sunday Football League. 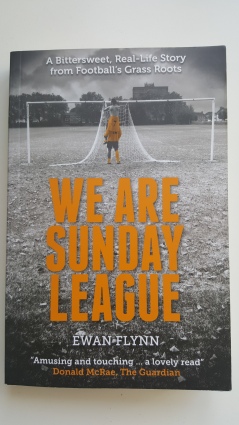 Every Sunday League player and organiser will recognise the dirty kits, hard frosted grounds, taking down the nets, the communal changing rooms, muddy boots, praying for at least eleven of you team to turn up and the on field antics of superstars.

The book also charts the start and demise of the club as mates grow older and their circumstances change, but it makes you recall the friendships made and lost. Wizards were blessed with success but many of us that turned out were for teams that didn’t win every week and sometimes were on the end of a drubbing from the runaway league leaders.

Ewan has also given a great insight into organising the club, the dedication of the league officials and a fascinating section on referee’s.

A book worth reading to remind you of your own Sunday League career or by loved ones who couldn’t quite understand why getting up early on Sunday’s was OK but during the week it was a chore.