The EFL trophy has been known by many names and in its 34th year is now named  ‘The Checkatrade Trophy. Checkatrade.com is the internet location where you can search through nearly 30000 recommended, vetted and monitored trades and service providers to find the right one for you.

It has for the last two seasons included not only teams from Leagues One and Two of the English Football League but also an additional 16 invited sides from Premier League and EFL Championship clubs with Category One Academies.

One of the Semi-Finals was Lincoln City v Chelsea under 21’s and making my way to the ground I was feeling I was on my way to watch a game of little importance in a Mickey Mouse Cup. Two hours later my views had changed and maybe a trip to the final beckons.

Lincoln City’s Ground has not moved to a new concrete structure on the outskirts of town but remains true to its fans nestled amongst an area of terraced housing south of the city centre. There on one street corner very close to the ground is not Arkwright’s shop but a local chippy doing brisk business before the match. It is aptly called ‘Back of the Net’, 17 Scorer St, Lincoln LN5 7XE.

The match was competitive and immediately you could tell that Lincolns’ players and fans wanted to get to Wembley.  The stadium was full and the nearly 9500 kept singing and chanting constantly. Lincoln harried every ball and made good use of the wings and their aerial supremacy in the box. Chelsea seemed more hesitant and found it hard to deal with the constant pressure and were unable string many passes together. Matt Rhead was a constant niggle to the Chelsea defence through his football skill, challenges and constant chat. The teams went in 0-0 at half time. 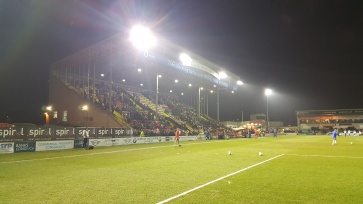 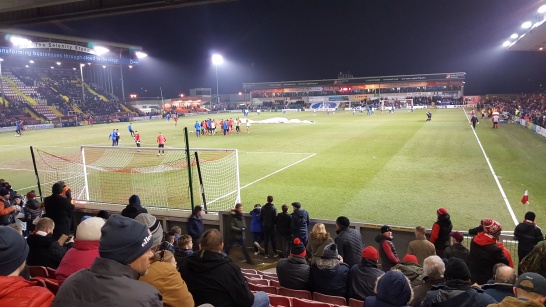 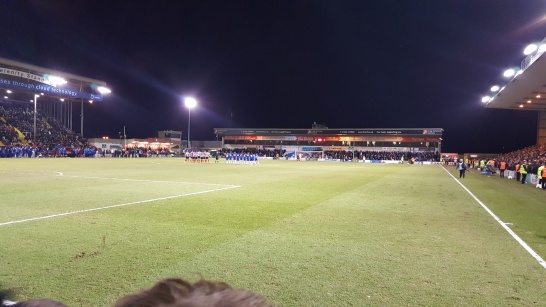 Chelsea started brighter in the second half but Lincoln came back at them and deserved their lead through Luke Waterfall on 72 minutes after a corner. The lead didn’t last long and within 6 minutes some classy play on the left moved the ball to Daishawa Readan who finished clinically from ten yards out curling the ball to the goalkeepers left. Lincoln had the best chances to win the game in the remaining minutes but Chelsea held out and it was down to penalties.

Chelsea were in front in the shootout after Lincoln left-back Sam Habergham saw his penalty come back off the underside of the bar but it was ruled not to have crossed the line.

Chelsea’s Ethan Ampadu hit the post and Jacob Maddox saw his penalty saved by Ryan Allsop to allow Lincoln to come from 1-0 down to progress 4-2. It was Lee Frecklington who stepped up to take his penalty with the crowd chanting ‘he’s one of our own’. Lee has spent all of his career at Lincoln and it was fitting for him to score the winning penalty and put them through 4-2 to their first Wembley appearance in their 133 years on 8th April where they will meet either Shrewsbury or Yeovil.

My man of the match was Ryan Allsopp Lincoln’s goalkeeper who not only saved the penalties but also had a very solid game. His kicking length and accuracy from hand and dead ball situations was outstanding. For Chelsea Ethan Amapadu was the only Chelsea defender who matched Lincolns commitment and aggression. The only downer on the crowds outstanding performance was when they sang ‘Where’s your caravan’ to Ethan (Ethan has very long hair) in response to him being their pantomime villain of the night. Even good humoured racism is not acceptable.

At the end the crowd enthusiastically ran onto the pitch and the singing went on for a further 15 minutes.