The Championship play off semi-final second leg is always a tense moment in a clubs history. Only one game away from the culmination of a long season the Wembley shoot out and the riches and fame the Premiership might bring.

A sell out of the Aston Villa fans ticket allocation meant an anticipated passionate atmosphere which was there from entering the ground 15 minutes before kick off. Parking and access to the ground as always was manic but one hopes that the removal of most of the old industry on the roads from the M6 and the building of new sheds will bring some new road schemes and the removal of some horrific fly tipping.

Giant musically synchronised flares surrounded the pitch as the two teams walked onto the stage. The sound was as good if not better than those European nights of what now seem long past. Time to recollect and show respect by a minutes applause in tribute to former player Jlloyd Smuel was accompanied by the Holte End singing “there’s only one Jlloyd Samuel” at first seemed unusual but as its intensity grew it seemed a very appropriate response. Further chants for him, Ugo Ehiogu and Dalian Atkinson were a reminder of all three ex players losing their lives so young within the past two years.

The game was tense as Aston Villa defended comfortably, not being phased by Middlesbrough having the majority of possession. The first half ticked by so fast as two teams cancelled each other out with no goals to add to Villas 1-0 advantage from the first leg.

The Middlesbrough’s tactic of channelling the majority of their attack through ex Villa man Adama Traore lacked any penetration, with Alan Hutton, the comeback kid, having the best of their battles.

Villa had the scoring opportunities with Lewis Grabban testing Dimi Kostantopoulos twice and Jack Grealish’s attempt bringing out the keepers best save. Adoma and Snodgrass kept tirelesly continuous probing down the wings and Villa seemed to be in command.

Finally chaos in the 87th minute as Traore gained control in the centre of the pitch just short of the goal area. Sam Johnstone rushed off his line to palm away his attempted lob only to have been adjudged to have been outside his area. A yellow card for Johnstone’s misdemeanour and a free kick within easy striking distance. Stewart Downing, another ex Villa player, stepped up to place the ball over the wall and clip the top of the bar. This signalled the end of Middlesbrough and Villa played out the remaining four minutes of added time.

Fans rushed onto the pitch and celebrated with the team with good humour. The Holte End wanting to see their team gain their adulation booed the transgressors and made pointed chants to how they felt.

Everyone left in an excited mood, looking forward to the Wembley trip but knowing that the 90 minute shoot out is anyone’s on the day.

So Villa Park rocked to the continuous noise of the crowed and their team was a rock in defence. Middlesbrough did not have a shot on goal from outfield play, Jedinak, Chester and Terry were rock slid in their performances. 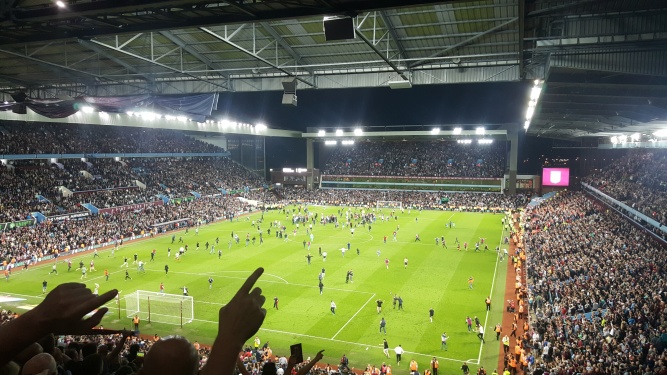