The omens were not great, Fulham had finished higher than Villa and their end of season form had been very very strong. Hope is eternal as they say and the game being played on the same day as Villa’s only European Cup win in 1982 increased expectation.

The crowds gathered in good humour and the songs were sung on a sunlit Wembley that was a great setting for this most important game worth more than £100 M to the winner. Again Villa did not turn up in the first half after their magnificent and emotional two leg win in the play off semi-final against Middlesbrough. This same lethargic response had happened after their 4-1 comprehensive beating of Wolves and the subsequent 3-1 home defeat at the hands of QPR which had put paid to their automatic promotion hopes. 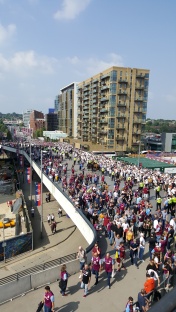 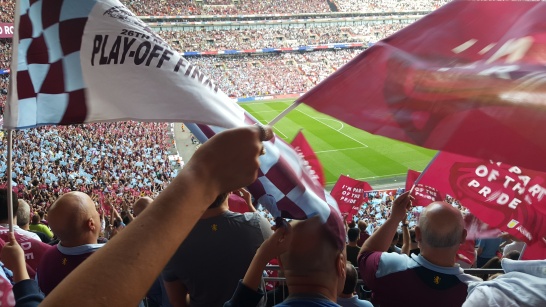 Villa defended  allowing Fulham to have more possession and it was no surprise that  their Captain Tom Cairney scored first on 26 minutes when he fired the ball past  Villa goalkeeper Sam Johnstone after latching onto Ryan Sessegnon’s pass that split Alan Hutton and John Terry.

The game stayed very sterile till half time with Fulham going in 1-0 ahead and considerably in control.

Villa came out in a more attacking mood in the second half but still looked lacking in ideas to prise open the Fulham defence. Jack Grealish tried to run at them and create the magic to get Villa back in the game and was fouled countless times. Frederick’s stamp on Grealish in the first half should have seen red which was shown to Odi midway through the second half totting up his two yellow cards for fouls both on Grealish

Villa bought on Kodja, Odomah and Hogan after this to stir a spirited resurgence and a search for the elusive equaliser. Hope was not fulfilled and Fulham will be playing in the Premiership next year.

Villa meanwhile will see a summer of major transformation with loanees and senior players returning to their clubs or ending their contracts. Gloom hangs over this part of the West Midlands as it all sinks in.

Talking of disappointments my home town team, St Albans City did not fare much better. Having been in the play off positions for virtually the whole season a defensive collapse in the final few games left them agonisingly one place short. St Albans have also announced another attempt to build a new ground away from their picturesque Clarence Park ground. Although this is needed for the long term future of the club it will be a sad day when it will eventually happen. http://www.stalbanscityfc.com

Another link to my St Albans City past ended this year with the demise of the Kleeneze company. Kleeneze was a door to door catalogue sales company offering home-ware goods in the same style as Avon do with cosmetics etc. In the late 40’s and 50’s my father, a committed St Albans fan used to travel to away matches in a box attached to a three wheeled motorbike instead of a side car. During the week the box carried Kleeneze samples and goods door to door in St Albans and at the weekend it was an escape to the football world of community, passion, highs and lows and friendship.

The season however ended on an amazing high for one of the greatest players in the English game. Paul Bastock retired after 1277 appearances in goal for English clubs in league and cup games. His career started in 1988 and 30 years later he played his last game, this was for Wisbech Town and it was a fairy tale ending with them gaining promotion to The Evo-Stick Northern Premier League Division One East. Paul played for many teams but he played a staggering 501 for Boston United and 274 for St Albans City. Well done Paul, you will be missed.

Image from The Non-League Football Paper

Even with the disappointments, bring on the new season.