The start of my new season was today at Staveley Miners Welfare F.C. who were playing Boston Town in an Extra Preliminary Round of the FA Cup.

A good way to start at the outset of the FA Cup and at a ground I have wanted to visit for some time. 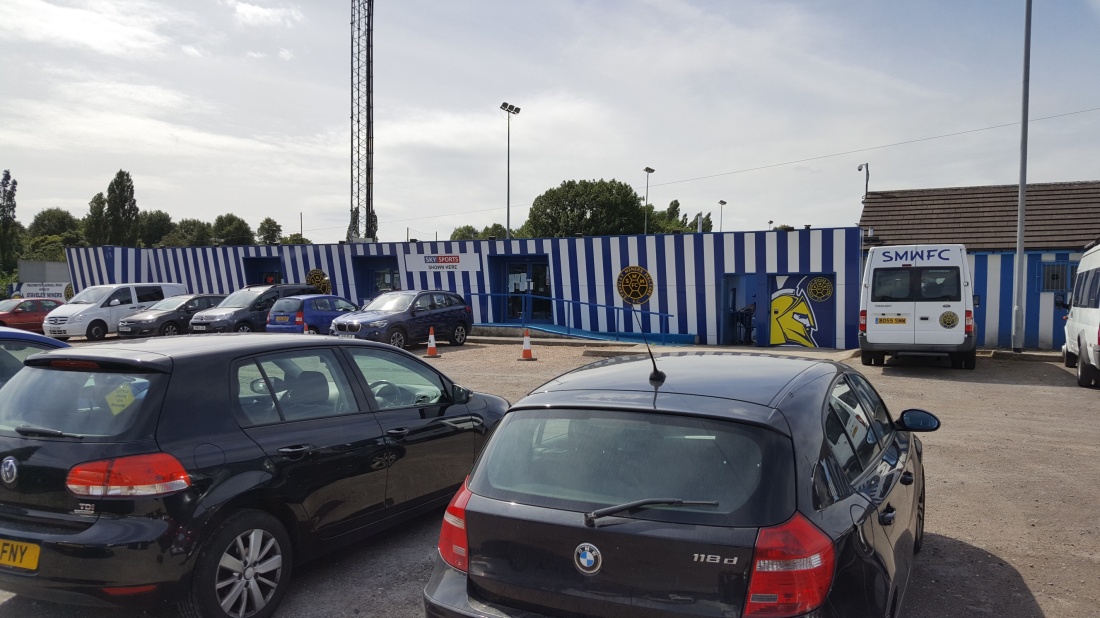 I drove straight into the car park on a beautiful sunny day at the front of the ground at no cost and paid my £3 concessionary entrance. Staveley play in the Northern Counties East League and their facilities could be of a team higher up the pyramid.

The club house is large, clean, good seating and tables with a well run bar and food serving point. The toilets were also spotless and two large screens were showing Sky Sports Saturday. Everyone was friendly and I didn’t get the stares as to who is he. It was also well used and 30 minutes prior to the game the whole crowd of about 100 were in there and there with very few late comers. The Club House facilities must generate good income for the club on a regular basis and  I’m sure it’s also down to a strong band of enthusiasts who seemed to be making sure all was well.

The 8 page program was free and the pitch looked good but lots of dust was thrown up during the game and you wander with such little rain has the grass grown only superficially and come the winter weather there will be a lot of poor pitches this season.

Staveley Miners Welfare F.C. were formed in 1962 as a Sunday team, then as the Nags Head playing in Barrow Hill and started playing on Saturdays in 1989. It has since risen to  its current step 5 level and despite difficult times in 2007 a new Chairman in Terry Damms has with his team made it into a successful community club with feeder teams of all ages.

The opponents Boston Town started playing in 1962 after their local rivals Boston United ran into difficulties. United have recovered and play at a higher level but Town play in the United Counties Premier Division Step 5 level. Their nickname is the Poachers. Both teams have reached the semifinal of the FA Vase in the past and should have been evenly matched.

Forgive the headline but I couldn’t resist with Staveley scoring first (although their nickname is the Trojans) second, third and fourth. 3 nil up at half time and adding a fourth just after the restart of the second half all should have been plain sailing. Boston came back with 2 goals to reduce the deficit but Staveley should have added a few more but for poor finishing.

Davies, Greenfield, Bell and Baskerville, scored for the home team and Johnson and Holland for the visitors sending Staveley through to a next round home tie against Lutterworth Town on the 25th August.

Everyone is always on about pies at football grounds, so this year I,m going to have a chip league. The chips at Staveley were hot, well cooked, served quickly,tasty but slightly soggy. They were only £1.20 a tray and therefore start the season in first place with a score of 67 out of 100.