A chance visit to Harewood House between Leeds and Harrogate brought me to a house just off the main car park full of second hand books, a must for all book lovers to browse. There on the shelves in the sports section was an intriguing title, ‘Coal, Goals and Ashes’ written by David Waddington and first published by Route of Pontefract in 2013. The £2 price was a steal and I had to stop reading another book to get started.

The books sub title ‘Fryston Colliery’s Pursuit of the West Riding County FA Challenge Cup was a bit of a give away but that was only the wrapper to the main event. 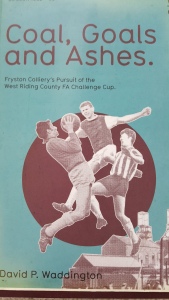 David Waddington is the son of the Fryston captain who led the team to its only ever win of the cup in 1963. For Fryston Colliery Welfare to win the West Riding FA County Challenge Cup was a feat akin to a Division 2 team winning the FA Cup.

The book is not just about football but an extraordinary social history of mining, village life and people. It was published in 2013 to mark the 50th anniversary of the feat and unfortunately not likely to be achieved again now that the club has disbanded.

Fryston Colliery was founded in the 1870’s and the first mention of a football team was approximately 20 years later. There were many struggles between owners and miners but the pit owners had the upper hand as they owned the houses the miners lived in. Early strikes were met with evictions of the families and a new band of workers with their families imported from Staffordshire. This was devastating for the locals but it did have a major impact on the development of the football team.

The author has used many extracts from local newspapers to gain authenticity and interviews with past players and their families to bring the book to life.

Mention of the Bevin Boys who worked down the mines in World War 2 is particularly interesting and their involvement with the history of Fryston such as Len Shackleton, Ron Greenwood and others.

Many of the cup finals that Fryston played in were at Wheldon Road now home to Castleford Tigers Rugby League team and Rugby League was a strong local draw for youngsters to play rather than football. One local cup final at Easter 1927 had an attendance of 2000.

Fryston finally achieved their ambition in 1963 but like many works teams are no longer playing. The books achievement is to show that football is not just about kicking a ball but skill, individualism, friendship, teamwork, adversity and passion.

2 thoughts on “Coal, Goals and Ashes.”