A visit to beautiful Buxton is usually cold, even on a summers day there always seems to be a cool breeze. Nearby Flash is the highest village in England and at one time had the record for the coldest. Boxing day was a balmy 8.5 degrees even at the ‘Tarmac Silverlands Stadium’ which is the highest football ground in the English pyramid system at 1000ft above sea level. 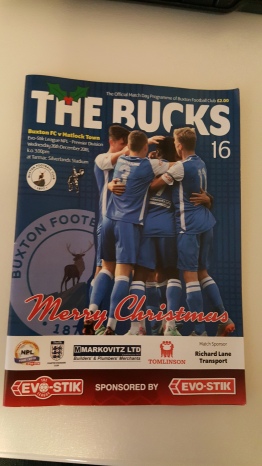 The days fixture was the Peak District derby between Buxton FC and Matlock Town FC both respectively in mid table positions in the Evostik League (Northern Premier League) – Premier Division. Twenty miles apart and at opposite ends of the Peak Distict Mational Park they have maintained a healthy rivalry for some years.

Buxton like many clubs started as an off shoot of a local cricket club around 1877 and have played in local and Northern Leagues all of their history.  Similarly Matlock FC were formed in 1878 and again have played at the same level as Buxton. They came to national notice for their exploits in the 1974/75 FA Trophy when they reached the Wembley final and defeated Scarborough Town 4-0. This result was also noted for the fact that the team had three brothers playing in it.

Buxton have been playing their Football at Silverlands since 1884 and in recent years have seen a major transformation. The ground sponsored by Tarmac, a local quarry operator, has seen the concourse and standing areas surfaced to a high spec. There are communications masts within the ground, presumably a source of income, and a very good club house. But the most noticeable new addition is the 4G pitch which allows the club to hire it out to Junior teams and a partnership with Rochdale FC who run an Elite Development Centre for 15 & 16 year olds one evening a week. These developments are very wise to maintain an income stream to sustain the club. The Silverland ground is the tidiest most professional I have visited all season. My traditionalist view of keeping grass pitches has been changed by this ground.

The game started competitively and Matlock were on top for the first 20 minutes with long throw ins causing concern to the Buxton defence. A free kick to Buxton on the edge of the penalty  was curled in off the nearside post  by John Pritchard to give Buxton the lead and a few minutes later a miss kicked clearance, after Buxton pressure on the left, gave Bradley Grayson an easy tap in. Buxton’s goal superiority did not last long as Matlocks Marshall cut into the penalty area and neatly lobbed the ball over the advancing keeper on 41 minutes. With half time beckoning the Gladiators again swept forward and Yates shot the visitors level. 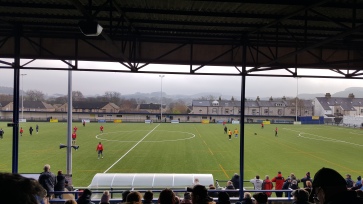 The second half saw end to end action with Matlock finishing the stronger. A score line of 5 all could have been the result with all the chances that were created. In the end the good crowd of 880 went home happy. The game certainly lived up to the Boxing Day football tradition first started in 1860 with a game between Hallam and Sheffield FC. It was also a timely end as the Buxton cold was beginning to be felt underfoot. 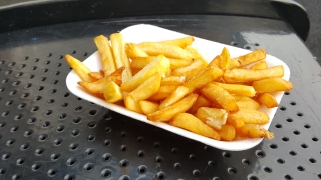 The chips were £2, golden brown, hot, firm and tasty and scored a high 78. The refreshment kiosk was efficiently manned by three people and were kept very busy throughout the match.