They play ‘Dirty Old Town’ as the teams come out and it is written large in the stadium, but this is Salford City FC the nouveau riche of Non-league football.

‘Dirty Old Town’ was written about Salford by Ewan MacColl  in 1949. He was born in Salford and wrote this song about the dirty industrial polluted landscape and people that he loved and grew up with. The song is said to have been written by him to help promote a play’Landscape with Chimneys’ that he had written a year earlier. He also tamed the words after protests by local Salford dignitaries. L.S Lowry also painted many pictures of the dirty local Salford landscape and the people who just got on with life.

This modern stadium is in a leafy suburb and next to a park with facilities that belie their current League status. Much has been written about the clubs ownership, 40% Peter Lim, and 10% each by Gary Neville, Phil Neville, Nicky Butt, Paul Scholes, Ryan Giggs and David Beckham and you can’t take away what has been achieved.

The stadium was opened by Sir Alex Ferguson in October 2017 and has seen the old ground completely demolished and a new kit stadium built for 5000, half seated, that can be easily changed as they grow. Is this a blue print for others in the future. 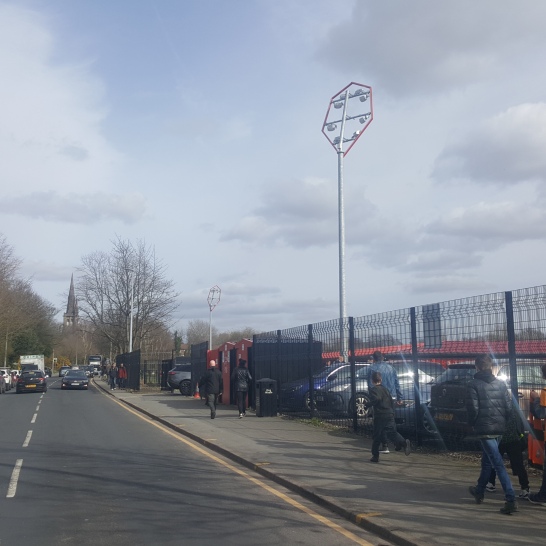 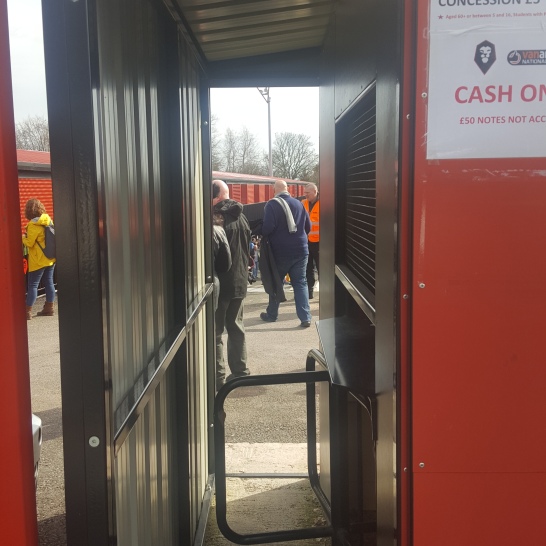 This is Non League on steroids, no raffle tickets here just containers converted to club shop, food service and drinks, all very busy. The seating on the two sides is good and is fixed to Checker plate terracing that goes right round the stadium. Everything is at the same height and there are what appears to be 20 boxes to facilitate corporate hospitality. It is so clean and tidy and you can imagine the pride of being a spectator here. All pitch side advertising is taken and it is significant that there are a good proportion of women and younger people in the crowd. I felt the crowd of 2452 was disappointing considering there were no Premiership or championship games to compete with and their position in the league. 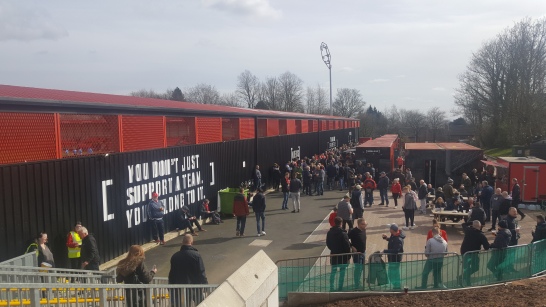 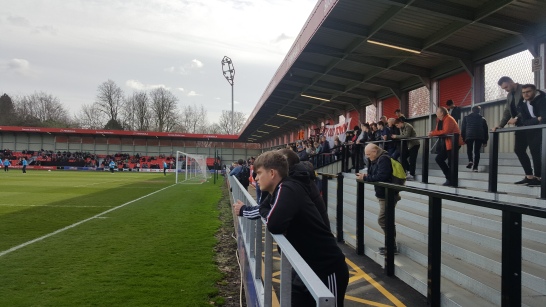 Sun shone on a level pitch that was worn in the goal areas, the corners and along the touch line. There were only a few Barnet fans and everyone stood for a minutes silence to show respect for those recently maliciously killed in New Zealand.

The game started with Barnet showing the most promise and they kept possession for long periods but with no cutting edge. Salford managed some domination as the first half came to an end forcing the Barnet keeper to make a great diving save to his right. He was completely beaten when a shot hit the cross bar but he survived the pressure until half time.

The second half was dominated by Salford but although they had the ball in the net the referee had previously blown for a handball offence. The referee had a good game in that he was never noticed and booked one player from each side when the tackles were too strong. Barnet showed a lot of resilience and their low league status seems only due to their games in hand. Salford should easily make the lottery of the play offs where anything might happen and get them into League two a year ahead of their aspirations

For me Salfords men of the match were Carl Peligianni and Nathan Pond who marshalled their defence with calmness. For Barnet Dan Sweeney was immense in defence but Andre Bouchard Barnets No 17 was overall man of the match as he tried and did make things happen the whole game as well as making many covering tackles.

The 64 page program was beautifully put together with great pictures and content, certainly well worth the £2 and it was no surprise that they had run out which I found out when a fan tried to buy mine off me. 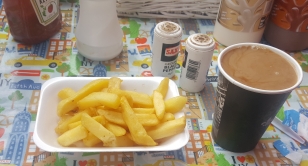 The coffee and chips were £3.50 but were disappointing. The coffee was weak and the chips were only warm and a bit anaemic looking. They were also a bit stodgy and floury resulting in a score of 57

Who would bet against Salford City FC being in League Two in the not too distant future.