Liverpool’s footballing exploits are strong but just off the City Centre is another piece of footballing folk lore at  ‘The Bombed Out Church’, St Luke’s. A memorial to the devastation of the bombings in the Second World War which is now used as a space for gatherings as a venue of all sorts it also now the home of the statue ‘Truce’ by Andy Edwards. 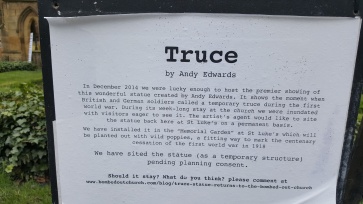 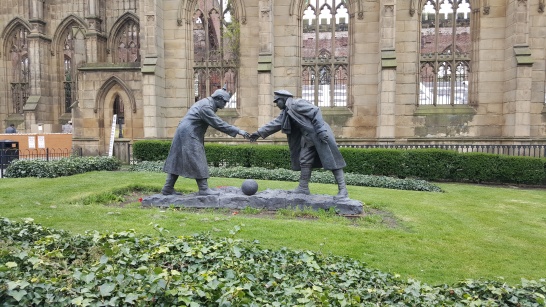 Talking to the security guard at the church, a function was just about to take place, he let us take photos  and explained that a quarter sized version of the statue sits at The FA’s St George’s Park National Football Centre, Burton-upon-Trent and the original life size version is in the Belgian town of Mesen, also known by its French name Messines, the closest to where the Christmas Truce of 1914 is believed to have started. The Security Guard said that there had also been talk of one being made and sited in Germany.

Whether a football game actually took place can not be totally corroborated although diary entries of German soldiers state it did. There may also have been more than one game along the whole length of the front. What is definite is that a truce lasting roughly a week did take place in 1914 and songs, gifts and hand shakes were exchanged. The statue brilliantly portrays the friendship of mankind towards one another and that humanity triumphs in the darkest of times. Unfortunately the guns resumed and continued for nearly 4 years with the loss of so many.

Thank you Andy for a truly inspiring piece of art.