I went through this turnstile last season to see Worksop Town but this year it was to see Handsworth FC. Handsworth are buildings a new 3G pitch at their long term home at Oliver’s Mount in Sheffield and hope to move there as soon as possible. Their very impressive youth set up is already based there.

So how did they end up in Worksop 13 miles away.

So what started in Sheffield will return to Sheffield after an interlude in Nottinghamshire. Quite a journey but I’m sure it won’t be the last as they continue rising up the non-league pyramid. 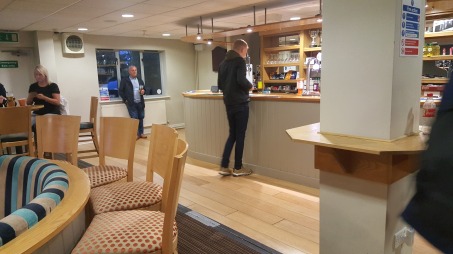 Barton Town F.C. are also an amalgamation of two clubs. Barton Town were formed in 1880 becoming a successful club in North Lincolnshire. However they hit bad times after 111 years and eventually merged with Barton Old Boys who were 33 years their juniors. So Burton Town Old Boys F.C. was formed in 1995 and they have enjoyed rising 2 steps in the pyramid system since then.

The pitch was in excellent condition after the summer rest and dark clouds drifted by on a dry night. 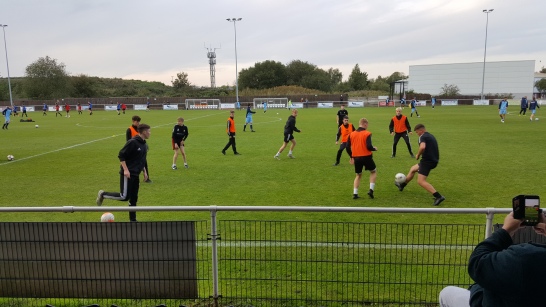 The Handsworth under 17 side warmed up on the pitch with the seniors to get valuable experience ahead of their own season and the game was underway to a goal after only 3 minutes for Barton as Ben Townsend in goal for Handsworth lost all positional sense to allow Ben Hinchliffe to tap home. Barton remained on top but a beautiful hit ball landed at just the right height for Jamie Austin to head home at the near post to draw level.

It should have been 2-1 at half time but Ben Townsend made amends for his earlier error by saving a penalty diving to his left just before the referee blew for the interval.

Handsworth looked stronger in the second half and a direct run into the goal keepers area drew a foul and a penalty that Leon Howarth placed well to Harry Cartwrights right hand for them to take the lead.

Leon Howard made it 3-1 when he glided past three defenders before slotting the ball home from an acute angle inside the goalkeepers right hand.

Barton pressed hard to get back in the game but strong aerial control by the centre backs, two outstanding saves by Townsend and the bar kept them at bay.

The summer rain was by now back again to dampen Barton’s  homeward journey and the result means they have lost their first three league games that makes the season ahead look gloomy .

The chip league made a disappointing comeback with the chips warm and soft. This was despite them being fried in a fryer, the fact that they are then kept in a bowl covered with metal foil ready for serving had an effect. They gained only a lowly 50.