What a difference two weeks make, after the monsoon in Northampton to see an extra preliminary round of the F.A.Cup I found myself in Walthamstow for the next round on a glorious sunny day with the car registering 35 degrees as we drove away.

I had come to see Walthamstow F.C. of the Essex League take on Great Wakering Rovers of the one step higher Isthmian League North.

The ground is part of a bigger complex that has artificial pitches and is for use by the community  throughout Waltham Forest. That community spirit seems to be flourishing with deeds not words and youngsters from Ryan F.C. were in force to watch the team and come out onto the pitch with the players. The crowd was the most diverse I have seen at local football for a long time in sex, age and ethnicity. 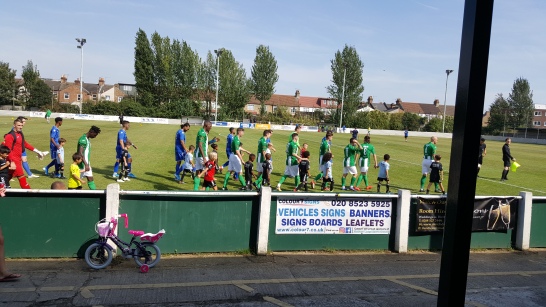 Football has always been strong locally here and the famous old team of Walthamstow Avenue won the F.A. Amateur cup twice in their existence in 1952 and 1961 and Leyton FC in 1927 and 1928.

Walthamstow F.C. have a history which the program calls not straightforward and they claim to be the second oldest club in London.

Definitely not straightforward and more complicated than Handsworth FC I visited on Tuesday.

Great Wakering Rovers by contrast were formed in 1919 and still bear that name. Their football was mainly locally based but since the turn of the century they have flirted with a higher status in the Isthmian set up.

The pitch was yellowing, hard and the surface slightly uneven as the teams kicked off. Long balls were the order of play and neither side made any inroads.

Then on 13 minutes Walthamstow’s captain Vinny Murphy clashed strongly with the tall Wakering striker Brandon Diau. They faced up to each other and the resulting physicality gave the referee no option but to send them both off.

Probing by both sides threatened but didn’t result in clear chances or goals and the teams remained level at half time. The referee stopped the game around 35 minutes for a well deserved drinks break, a good decision by the officials.

The second half saw Walthamstow’s  Mc Cullock and Gebrai continue to threaten with direct runs but on 51 minutes Bennett was brought down in the box and Dwade James casually converted the penalty to the goalkeepers left. Within 2 minutes Walthamstow had another penalty when Samarai Gebrai was fouled on one of his runs. Dwade James casual run up did not suffice this time as he blasted the penalty over via the crossbar.

Rovers kept pressuring for an equaliser but their strength was further sapped with Henry Fisher being sent off for a foul on Danny McCullock.

Tiredness soon told and and a through ball to Jack Folan was neatly collected and curled in past the keeper.

A great afternoon that I hope will encourage some of the junior fans to return. Good luck Walthamstow in the next round.