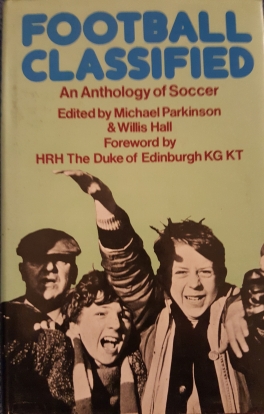 This easy to read 50p bargain from a Charity Shop is only 187 pages long and is interspersed with the odd cartoon.

The short stories and articles are a bit dated but some are relevant today and show where the game has come from. It also reminds you that ‘Football Books’ did not start with ‘Fever Pitch’ in 1992.

My favourites were two articles by Derek Dougan the loved Northern Ireland player and Manager and the idolised Wolves player. In a few pages he weaves a great story of how he became established in Northern Irish Football and the interesting religious mixtures. The other is about how to choose a football club as a youngster with a view that tradition of a club my hold you back.

Another article by Tony Pawson talks about Managers, partly about Danny Blanchflower’s   relationship with them. He wanted to be captain but have the authority on the field and change tactics as he seemed fit for the way a game was heading and be involved in team selection. This would not sit well in todays game but perhaps should be reviewed especially in view of the success he had at Tottenham.

There are chapters by many well known writers, J.B. Priestly, ian Wooldridge, Brian Glanville, Willis Hall and many more. The book satisfied my curiosity for the game.