I visited Athersley Recreation FC on Wednesday evening to see them play Maltby Main FC in the Toolstation Northern Counties East, Premier Division. I had been to this ground in the past but that was to see the now defunct Shaw Lane AFC who were ground sharing at the time. It is on the edge of a housing estate in North Barnsley and has a handy car park down a narrow entrance between two houses.

The clear night was cold with a biting wind. The pitch was heavy and slightly sloped towards each goal with muddy areas down the centre of the pitch having taken a hammering with all of the recent rain.

My first port of call was the snack bar for a large tray of chips and a coffee and I sat down in the cosy and warm portakabin bar area.

I ventured out a few minutes before kickoff to see a reasonable crowd of 117 had braved the elements. 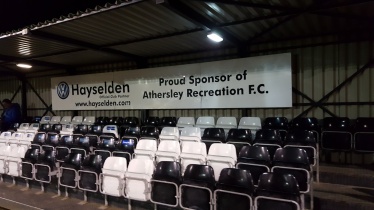 Athersley had a very young side particularly up front and had two clear chances in the first 15 minutes although Maltby looked the more polished side. It was no surprise that on 28 minutes Jonathan Hill was left alone in front of the goalkeeper to score Maltby’s first after some neat passing. Athersley never gave up and dominated the ten minutes before half time.

Bovril this time at half time to warm the hands,  it tasted good, being quite strong compared to some.

Maltby’s strength was beginning to show and they further increased their lead on 61 minutes when Rory Coleman guided the ball  from a narrow angle on the left of the goalkeeper to make it two nil. This was after a strong run from Hill from near the halfway line.

Just 3 minutes later a ball through to Maltby’s Foster beat the offside trap and Ross Pritchard in the Recreation goal raced out and fouled him on the edge of his area. The referee took time to consult his linesman who was nearer the incident and the goalkeeper was lucky only to be shown a yellow card. Maltby reacted quickly and Coleman swung in a ball with the Athersley defence not fully prepared and it went into the back of the net off a home defenders head. 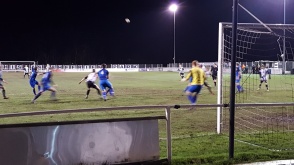 Athersley kept at it but didn’t create any strong chances. This was despite Kane Swinburn (No 10) terrorising from the right wing but not being able to make a decisive pass after such good work.

The result consolidated Maltby’s mid table position while Athersley are fully rooted to the bottom with only 9 points, 4 away from their nearest rivals, despite some recent better performances. Considering the fact that they did compete for the whole match they could still make up the difference.

The game was competitive but fair and there was no repeat of my Saturday experience when the two teams constantly harangued the referee.

It was good to see Dan Jarvis, Local Barnsley Central MP and Mayor of Sheffield City Region supporting Athersley in the program.

The large portion of chips and coffee were £2.70 with the chips being hot, crispy and tasty. A slight burnt taste to the oil meant a score of 68.