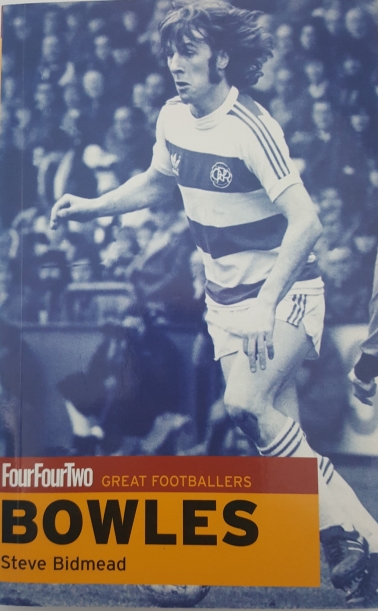 This was a nostalgic read capturing the era when characters not only filled the back pages but front as well of the press in general. Stan Bowles was the anti hero to some but a hero to many who saw him as one of their own. He has been termed a maverick by many which is defined in The Collins Dictionary 25th Oct 2016 as : a person of independent or unorthodox views….Over the subsequent course of time, the word has been used to describe people in both a positive and negative context. To me Stan was a postive person reflecting the lives of many of his time. He was also an amazingly talented footballer.

This book captures the time and with the help of Stan a look into his world.

Born in Manchester he first came to fame at Manchester City but a  not unusual fall out with another larger than life  character Malcolm Allison saw him leave and play for two northern clubs before he joined QPR in 1972 and set in motion a seven year stay that saw him idolised by the fans.

He was bought to replace Rodney Marsh, departed for Manchester City, whose number ten shirt no one wanted to wear. Marsh had become a cult figure at the club and I can testify to this having seen him dominate a game at Watford one evening. An injury on the far side of the pitch from the dugouts saw him leave the field, lean against the hoardings, chat to the fans for a few minutes, then signal to the referee to return and continue his masterclass.

Stan Bowles however was not fazed by his predecessors aura and soon became the fans darling due to his on and off field antics. As a player he would often receive the ball in the attacking half and be able to effortlessly jink or body swerve a defender and bend a ball with both sides of his right foot to produce a telling pass or shot. QPR  arguably had a golden era when Stan played for them.

Unfortunately his footballing abilities were overshadowed by his life off the pitch and this book captures this brilliantly.

Not to ruin the book I will list only two of his telling quotes and these only from the introduction, ‘I lost a half million quid on gambling, booze and women – the rest I wasted’ and ‘I was penniless again. I’d blown the lot on vodka and tonic, gambling and fags.Looking back, I think I overdid it on the tonic.’

If you can get a copy of this book sit back and enjoy a time when individualism was still above the team ethic and personal activities were not plastered across Social Media.