Having misheard the Google maps directions I was up against the clock and I could see in the distance the lights of Clipstone FC but it was the eerie menacing dark enormous shadows of the mining headstocks in Clipstone that take your breath away. The giant mining towers built in 1953, the largest in Europe at the time, were closed in 2003 and now are grade two listed buildings. Locals have been campaigning to keep and develop the site, which is part of the local Welbeck Estate, for some years.

Entering the ground with just 10 minutes to kick off I went straight to the Cobra Cafe door where strict Covid procedures followed those at the entrance gate. I joined the queue as each portion of chips were fried. They were just ready for eating as the teams ran out. They were very hot, tasty, crispy but with a soft inside and did not taste of the oil that they had been cooked in, overall for £1.80 a treat and a score of 77 for my chip league. 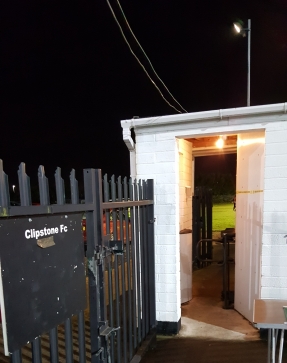 After yet another wet October day, looks like the wettest October on record, the evening had become still and you could see stars in the sky on the drive to the match. But being clear it was getting colder and a feel of winter was in the air.

This is a very compact friendly ground with other sporting activities adjacent to the main road that runs through the village. The surface of the pitch is basically flat with a few undulations, as with all pitches this season the grass cover was immaculate.

Clipstone were known as Clipstone Welfare until 2013 a name they had chosen in 1955 having previously been Clipstone Combine. They have been a successful local Nottinghamshire side and reached the Nothern Counties East League only to have dropped back to the East Midlands Counties premier Division in recent times.

Borrowash Victoria can trace their history back to 1911 and their current football level is the highest they have achieved.

The game was soon competitive with the home side having most of the attacking play although Monty Parkes in goal for Clipstone made a great diving save to tip the ball over the bar.

Just two minutes later Charlie Dawes received the ball on the left with plenty of time to attack the Borrowash goal and score high into the net. He was on hand again 8 minutes later when from the left touchline he cut in field to make it two nil placing his shot into the corner of the net to the goalkeepers right.

Although Monty Parkes made another great save similar to his first, Borrowash did not threaten further and it was the home side who went in two goals up at half time.

Borrowash Victoria came out early for the second half and after a team chat and a huddle looked set to take the game to their opponents. However this resolve soon gave way as a ball to Josh Pickering allowed him to rush past the defender and hit an inch perfect pass from the right for Jack Warwick to stab into the net.

Clipstone dominated play and a corner from the left with 10 minutes left was met by Lewis Warwick who headed an unopposed ball into the net for a comprehensive victory.