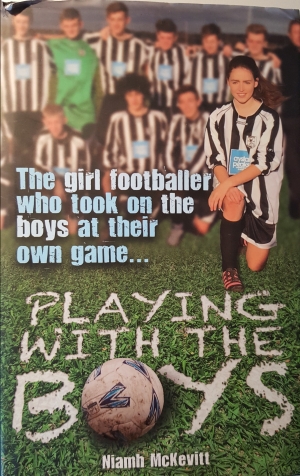 This easy to read and sometimes funny book is a journal of teenager Niamh McKevitts dogged determination to play football at the best level possible. She finds that playing with boys teams gives her more opportunity to hone her skills but more importantly to compete with players who are at her age level or above.
Her story is of how she searches for the best teams to play for and stands up for girls/women to be able to play against boys/men of an equal age on an equal footing.
To do this she has struggles against her school, coaches,  general prejudice, team mates, opponents and the F.A. However with changes at the F.A, who believed that girls will become better footballers if separated from boys, she is able to help effect the change that now allows girls to play alongside boys in competitive matches right up to 18.
Niamh plays and succeeds with teams at the very top of boys football in Sheffield and demonstrates through her play that she is an equal and deserves her place in the team. It should also be noted that but for her Dad who supports her all of the way then a lot of this would not have happened.
Anyone who enjoys football will not only enjoy this book as a reminder of the struggle in the women’s game but also will enjoy the human story and an insight into grass roots football.